I have ne er heard this and with timeless in balanced I get over 12 hours BTR was after every use,

I haven’t seen FR graphs, but in SE, my Q5k sounds rolled off on the low end, when compared to balanced. Just comes off as more upper bass and midrange-focused. Has anyone else heard this or am I imagining it?

I love the Q5k balanced.

I think it is just your imagination and listening on non-matched volume unless you are listening to something really power hungry like planar headphones.
For me all my IEMs including S12 sounds exactly from Q5k the same SE vs. BAL when I try to set the volume similarily

But my ears have failed me not once, so you never know

I completely forgot about that click noise. It disappeared after some time. I wonder if one of the firmware updates fixed it and I never noticed.

All that matters is what you hear or do not hear

So I finally spent enough time with the Q5K to feel comfortable sharing my impressions about the device. I won’t go into details about all the features of the Q5K as they are littered all over the internet by people with far more expertise than myself. Instead I will be focusing more on the general usability of the device and comparing it to another device that has surprisingly little written about it (in my opinion), The Fiio BTR3K.

Note: All these impressions were done using the Olina with the stock 3.5mm cable so please keep that in mind when reading my comments around battery life and sound quality.

Before started the review its important to know that I bought the device for its BT features first and DAC/Amp features second. I wanted something that was super small, has a mic and just vanishes from my mind after I clip it on my shirt. The sound quality is important to me but not at the expense of compactness and usability. That is why I completely skipped on the BTR5 and other BT DAC/Amps out there. Also it’s important to note I don’t plan to use anything else but IEMs so my power requirements aren’t very high.

TL;DR For those who don’t want to read everything below I will just say that I prefer the Q5K over the BTR3K although it is close. The 3K has some benefits over the Q5K, specifically in the form factor and button layout however everything else points in the 5Ks favor. If I already had the BTR3K and couldn’t return it I would keep it and pass on the Q5K but if you are looking for a device that can handle anything you want to throw at it, definitely go with the Q5K.

The device is impressively tiny. I thought the BTR3K was tiny but this is actually shorter and thinner than the 3K while being just a tad wider. Its also very light so once its clipped on my shirt I don’t really think about it anymore… except for the fact that the headphone jacks point up! I didn’t think this would be a big deal but it is if you are looking to clip it on your shirt collar, which if you want to use the mic you will probably be doing. If your headphones have a straight connector it will jab you right in the neck pretty much every time you move your head. I was able to work around this by clipping it to the side of my collar so it points sideways. This alleviates the issue but makes hitting the already inconvenient button more inconvenient. The fact that the BTR3K has a detachable clip so you can point the jack up or down is pretty great move in my opinion. 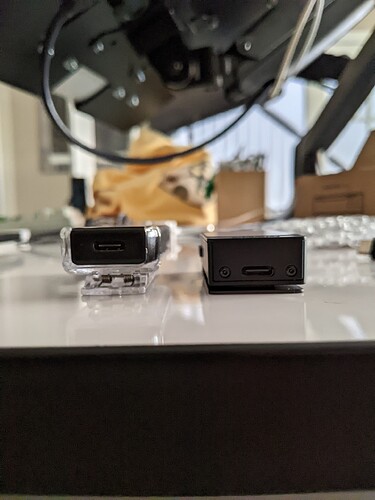 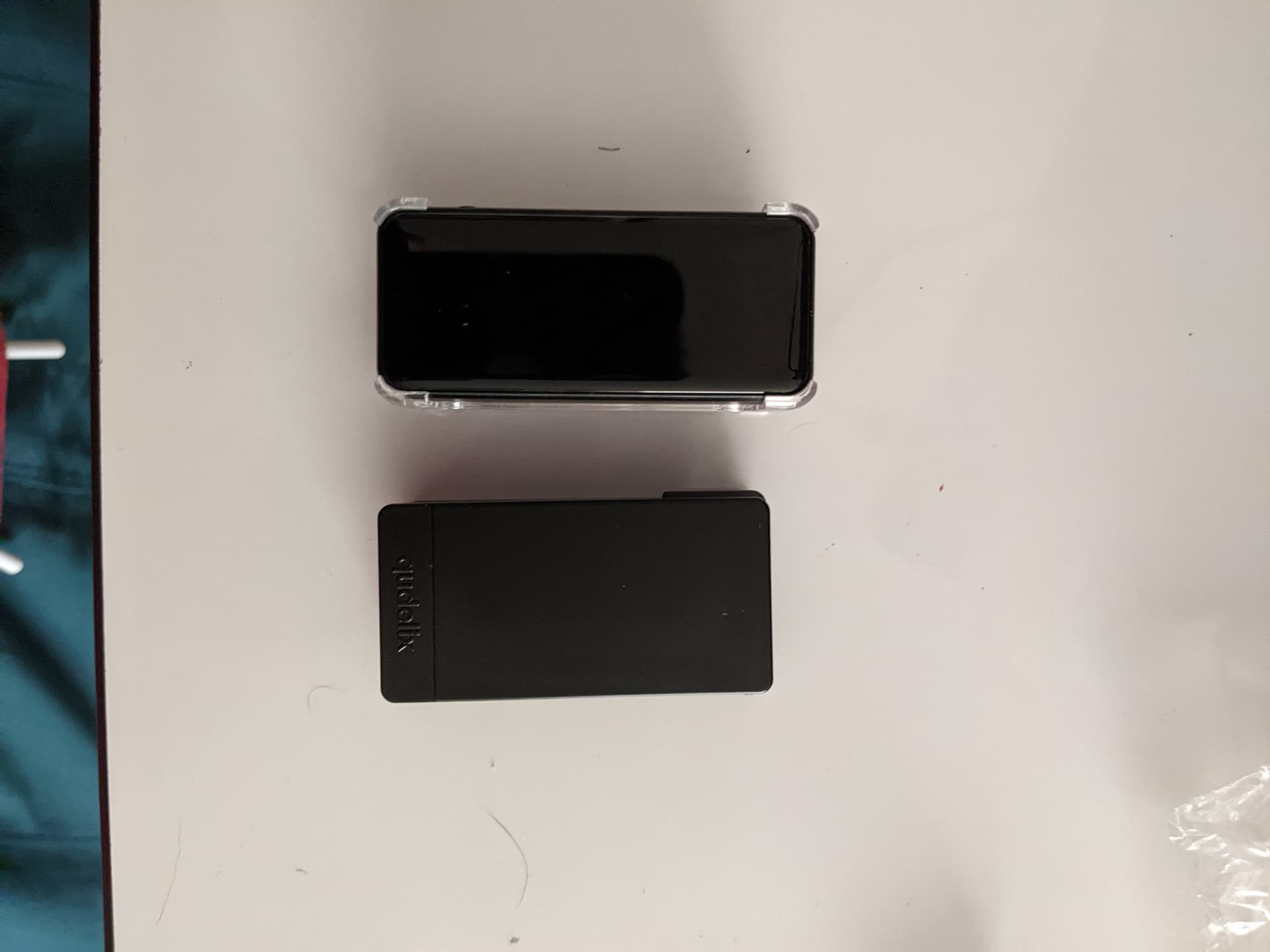 I really don’t like the buttons. It takes time to remember which side is which and the LEDs don’t help if its on your shirt. I have started getting used to them but the button layout and button quality on the BTR3K is just so much better. Also, the top bumper buttons are weird, I find you almost have to hit them at the corner to get the best tactile response. Trying to push a button often results in pushing the button on the other side too which the device just registers as no button push in my experience so yeah, not great.

This is where the Q5K starts to shine. The BT connectivity is great. I would walk all around my house and even outside and never had an issue with dropped connections. The multi-point works very well and is pretty seamless. I could be listening to a song on my computer, get a call so it switches to my phone and then when the call is over the song on my computer starts again. The BTR3K multi-point is nice as well but I would got some weird issues where even though my phone was connected to the device, it wouldn’t play out of the device. The other feature which was huge for me is the mic pass-through. This was something I wanted desperately since a big part of my daily use of the device was going to be on team calls and I really like having mic pass-through for chats. BTR3K didn’t have it afaik so another point to the Q5K. Lastly, the app. Its pretty amazing how much functionality is configurable via the app and that isn’t even touching on the DSP options. The Fiio app is pretty useless and the fact that the BTR3K requires a windows machine to do a firmware update means I will never be able to update the firmware which a big negative.

Q5K wins this round easily

There are plenty of reviews talking about the sound of this device so if that is what you are interested in it for I would suggest reading those over my impressions but I will talk a bit about the differences I hear between the two devices.

Overall the BTR3K is more engaging, sounds slightly warmer and intimate in its presentation. The Q5K on the other hand feels like it brings out more details, bass presence and expands the soundstage, however the vocals are recessed compared to the BTR3K. I will say, from a purely music enjoyment perspective I would pick the BTR3K. I get lost in the music and before I know it I am dancing around the house! I didn’t have that experience with the Q5K even though I would say the Q5K produce “better” sounding music.

Jack Harlow - I’d Do Anything To Make You Smile: 0:15 - 0:50
BTR3K - The harps and strings can be differentiated at the beginning but don’t have much depth to them compared to the Q5K. The bass drop feels like it has more mid-bass but less sub bass so it doesn’t feel as authoritative compared to the Q5K. The left and right water drop noises can be heard clearly and seem to be in the correct position. Vocals come in and are pretty forward, roughly the same depth as the bass. Overall tonality tilts a smidge warmer but not too different than the Q5K.

Q5K - The separation between the harp and the strings is pretty clear and when the bass drops there is authority. The sub bass just hits you in the face. The negative space right before the drop really emphasis’ the power of it. After the bass hits you hear the water drop sound from both the left and right faintly but clearly, then the vocals come in slightly recessed from the bass that is still hitting strong.

BTR3K - Everything feels like it is mid boosted and flat here. The build up at the very beginning feels a bit strangled and Dan Reynold’s vocals have a certain muddy quality to them. As with the other song, the bass drop is lackluster here. Overall the song didn’t feel dynamic to me.

Q5K - You can definitely feel a more V shaped tonality on this song and the dynamics blow the BTR3K out of the water here. The build up at the beginning ends with a nice rumble and then cuts into Dan Reynolds vocals which are strong and clear. The Bass drop has authority and you again notice the clean separation between the bass and vocals. Vocals are somewhat recessed but not terribly so.

BTR3K - The mid emphasis really works with this track. Notes have good weight and there is more texture on the guitar distortion than with the Q5K. The flatter presentation works here as well because each instrument is still discernible and it doesn’t feel like its lacking any details. The vocals are appropriately forward and engaging, resulting in a very toe tapping experience.

Q5K - The song starts with a nice guitar riff into a drum roll which comes off beautifully. However, when the vocals and guitar come back in there is enough separation that I start to get distracted by it and it pulls me out of the song. Note weight feels lighter than with the BTR3K but I still wouldn’t call it thin.

So why did I pick the Q5K? It really came down to the software for me. Even though I noticed a difference in the sound signatures, both devices sounded really good to me but the BTR3Ks bottom jack and button layout wasn’t enough to overcome how feature rich the Q5K is.

Agree with all of this. A right angle cable is the fix I’m going with for now.

I just got the Q5K and have been using them with my EJ07M KL, and I noticed the lack of oomph/warmth/naturalness when compared to just plugging them directly into my Pixel 4a. After looking through the forums, I got the idea of changing the Output Power from High down to Normal and it seems to make a huge difference. Has anyone else noticed the same thing or am I just thinking I’m hearing something? For reference, I’m listening to a lot of harder rock - Tool, Twelve Foot Ninja, Alter Bridge, Nothing More, etc.

do you mean it sounds worse if you set it on high power output?
have you tried using the balanced output?

What’s the impedance of EJ07M? Low gain settings are typically recommended for low impedance IEMs. My Canon is the same on my Qudelix.

So you find the 5K on normal with the Canon to sound better? Do you use balanced or SE.

I bought @MMag05 Canon which should be here Monday so looking for setting recs!

Congrats! I use SE, low gain. I don’t hear a difference feeding it more power and voltage on the Qudelix, and if I try to use bal on my ifi Zen DAC, I get a pretty audible hiss. Expected as Canon is 8 Ohms impedance. Anyway, don’t want to get too off topic here, so feel free to DM me if you have more questions!

This is super helpful! Saves battery life going SE normal gain so I cant complain. Also gives me a reason to get a right angle adapter for my new balanced cable

Yeah, it sounds more sterile on high power output and the treble is stronger. I only have 3.5mm, not balanced

Moaarrr praise for the Qudelix-5K: 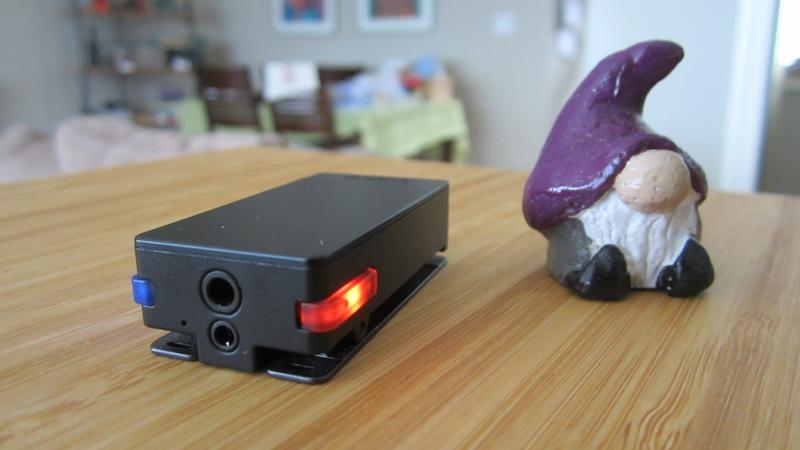 A thorough review of the Qudelix 5K Bluetooth DAC/amp and the QX-Over iems by Jürgen Kraus.

Moaarrr praise for the Qudelix-5K:

His section about the QX-Over killed me. The whole appeal of those isn’t the stock tuning but the included preset EQ settings to hit various targets, which was by far my favorite part about them.

I’m waiting for one of the planar competitors to do similar and use target EQ settings as a way to stand out from the competition.