Might as well get a Fiio BTR5K, since it would make more sense for me to go wireless at this point, plus it’s a very good L-DAC for the price. But for now I have to look for more possible candidates as replacement for my Samsung A71, and I kind of want to move on from Samsung, for lately I am getting sick of their crap.

Asus Zenfone 8, OnePlus Nord 2 and the Poco X3 GT are the main three so far that have piqued my interests, but I think it’s a good idea to look for more.

Asus Zenfone 8, OnePlus Nord 2 and the Poco X3 GT are the main three so far that have piqued my interests, but I think it’s a good idea to look for more.

I don’t know about the GT but I have an X3 NFC and LDAC sounds distorted on it.

I see I will keep that in mind about that one, because right now I am mainly focusing on phones with great specs for the price, but feel free to recommend something that is much better than the things I’ve listed.

I have ZenFone 8 and it is really great piece of device as long as you forgive the battery life being less than average (4h of SOT is really max on 120Hz refresh rate). Quite fast charging is kind of a help with that, but still I am constantly thinking about getting it connected to power supply so it won’t die in worst moment.
It is small powerhouse, camera is really decent and it has really good form factor.
There are some complaints regarding hardware issuees at the moment, but it did not touch me up until this point.
I am not huge source believer, but for my IEMs the jack sounds very good and not really distinguishable from Q5k or Sony NW-A55. I don’t use it a lot though as in the end I like this phone with nothing wired to it.

I would look up the Xperia 5 mk 3 as it has good stock DSP, headphone jack + microSD slot which makes it great package in my opinion. Price is a bit high though

Yeah I also want a damn Sony phone as well, but their prices are a bit too high, that is also a thing that I want to rant about, lower your prices a bit Sony so that people can buy your god damned phones! They have the potential to even usurp Samsung for the Android throne but they are not doing that.

Also what the hell is with their naming system on their phones, there’s no clear view on what is their flagship phone or mid-range phones, for the names of their phones are fucking confusing.

i seem to have an issue of being a bit of a data hoarder… i have almost 300 gigs of FLAC files on my computer and most of it on my phone too but i almost rarely use them, its some super OCD idea of “yeah i got to make sure its there in case i wanna listen to it”. and i wont need these files on my phone because future phones no longer have SD cards, i kinda keed a new phone similar to k4sh1ma (one of my reasons is actually that the mic is dying which is actually deserving in a phone) but i almost am thinking of getting a DAP so i can keep SD cards. or maybe i just need to accept other apps like the bandcamp app or tidal or qobuz to listen to stuff instead of just downloading most of my immediate buys… i don’t even use my phone for a lot of things except internet and youtube and music… basically all i need are 3 or 4 things

I’ve given up on the headphone jack since I’ll just buy anything else to fix it, i almost never use the camera, and most of the difficult things… basically an upgrade form my LG in those 3 things… and then a BTR5 or dap depending on if i should have my lossless bandcamp downloads

Tuesday morning I sat down in my home office and my Herman Miller Aeron seat cracked.

I have to wait nearly two weeks for the replacement seat, and it will be around $250 with shipping and tax, which isn’t awful. I can look forward to my back being sore for the next couple weeks, which sucks.

I have to wait nearly two weeks for the replacement seat, and it will be around $250 with shipping and tax, which isn’t awful.

Was it still under warranty?

Nope, it was a refurb and the limited on that expired a month ago, of course

Guys, I have to say that I have been offline for a while due to me and my family having our own little vacation trip in our very own humble vacation house, so far so good but I have a bit of a frustration that is currently looming and I wanted it to be fixed as soon as possible.

Currently with my new phone and yes, that frustration is related to my old phone because for fuck’s sakes a lot of stuff that are important needed to be in my new phone at utmost importance such as my accounts, debit card, ids, etc.

Right now the current problem that I am facing is currently with my Samsung account for I just want to use it again, I know I won’t be able to use it since it is still connected to my old mobile no. that got lost with my phone. So I’ve tried resetting my mobile no. but come the fuck on, I had to enter the past IMEI and Serial No. of my old phone just to use my account again?! I just want a simple reconfirmation of my new number to overwrite the old one I got and apparently I should remember those IMEI and Serial numbers just to have my fucking number changed.

I really don’t know what to do at this point and it is so frustrating! If only I didn’t lose my previous phone in the first place so I didn’t have to deal with this shit!

After few months of random internet cuts…
Usually cuts lasted like 1min here and there. Some in mornings, some during day and some later at nights. About 1-3 cuts per day and random times. Just these last few days things have gotten worse…
New cable-router, every damm cable changed. Nothing.
Finally it happened today. No connection… so it aint the house.

Internet provider sends techguy on monday so no fast internet for all weekend.
As a techguy and gamer and streaming service user… it will be something else. poop

internet, land lines and lots of mobile services went out today. apparently an accident in the middle of nowhere took out serviced for a huge chunk of northern BC.

mobile calling is back, sms texting, but almost no data. i have 250kb / s up / down according to Speedtest.

not expected to be restored until late tomorrow morning.

For the love of Christ please fix this

Even a banner linking to Pastaah’s onlyfans acct would be a welcome change.

well, the internet is back…but wow was that weird. if anyone knows BC, hwy 16 connects Prince George to Prince Rupert, where I am, the only way in / out of the Similkameen. the crash happened in a tiny village between at, ironically enough, about the half-way point between the two cities. the damage to the fiber trunk in the middle of nowhere took out all the com services between PG and PR, internet, land lines and mobile. mobile and land lines were able to sort themselves out and come back online, but so funny that towns the fiber line goes through before getting to Topley caused the internet to fail all the way back to PG.

Glad to hear things are back and stable.

I don’t know if this an actual rant, or if I am just venting. Spent the last three days working in a space where the noise level is at 100 DB plus. Those Beyer Lagoons are doing a great job and all, and I even put cotton in my ears as a second layer, but geez, it’s just this brutal sonic attack!

Hard to explain, but you can kinda feel the environment getting after you. It actually can get fatiguing after prolonged exposure. Makes for a tougher day, for sure. You just have to take periodic breaks, which slows you down a little, but if you try to just push through it’s no bueno at the end of the day.

Anyway, rant/vent over. I’ll be at it again tomorrow.

Maybe a bit off topic, but it annoys me when using Ableton live the way there is still CPU usage when you have plugins turned off, even though there isn’t supposed to be. It’s noticeable when you have a lot of plugins in a project.

Just had to buy an Apple product for the first time and I’m fucking mad. 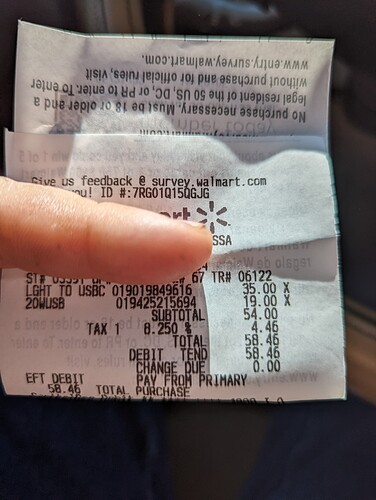 To be clear, only reason I bought the Apple brand versions is because I needed to return a work iPad and couldn’t find the charger and cable, thusly to make up for my short fall, I felt it necessary to replace with as close as I could to exactly what I lost

So, yesterday i got a soar throat when i woke up, so i worked from home. During the day i got a fever and developed a cough. Then, in the afternoon the fever and cough got pretty bad and during the night i was more awake than asleep. Did a covid rapid test this morning, and sure enough it showed a positive result. I do feel much better already, but usually when i am sick i do tend to feel better during the day, and then worse again at the evening.

I’ve been lucky not to get it earlier, but it could not come at a worse time. Today (friday) i had the day off work, and the weather is great (sunny, 25-26c, and a gentle breeze), but all i managed to do was taking the dog for a short walk (under half of my normal distance), and lay on the sofa with my laptop. A day off work wasted

Worst thing is, i think i might have gotten it at a work related dining out event, since all i have done this week is that and going shopping for food 1 evening. The rest of the week has been spent at home or at work.

I have self isolated from when i started getting the symptoms, and while it is not that important where i caught it, i do feel i will have to try to prevent spreading it by isolating and only going outside when walking the dog (at places with low chance of getting to close to other people).

So, here’s hoping for a quick recovery, i have my 3 vaccines, and that i can get some enjoyment out of the weekend