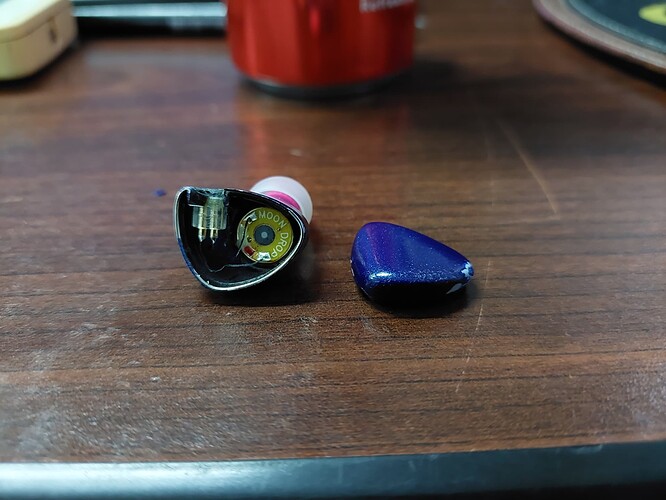 Moondrop, I think at this point, today, I can officially say that I am fucking done with you! For this type of shit is unacceptable and I know this is the very first Moondrop Starfield that I got when it first came out but even so, this type of shit should have not happened in the first place! Just the shell opening up without any reasonable reason why.

Also it’s not helping you guys, if you cannot fucking honor the warranty that I had with my Katos, even though let’s be real! You guys can pretty much deal with it but you just wouldn’t want to and I don’t have the budget and time to return my Katos to the seller I bought it from and the support I contacted from the app I ordered it from hasn’t sent me an email yet!

I am so disappointed! for most of their sounds has been a great experience and it mostly caters to my ears, especially the Katos! But with their incompetent shit service, yeah I am done! I think it’s time for a change at this point, might try the Tripowin X HBB Olina once I have saved up again.

Hoping the future will be better.

But looking at the super tiny cables inside the chamber.
I can just imagine how much the sound improves with high quality cable outside of the chamber. (joke)

It would be fun to disassemble few from MoonDrop in the same price range and see are the internals same even if model changes.
It really looks something that costs 6$.

edit - interesting…the favicon of our forum image gets a halo if you’re the creator of the discussion and were the last poster. guess it’s a little signal that nothing has been posted since for you to see.

Let’s hope it will be better, for the only IEM from Moondrop that I don’t have a QC issue so far and let’s hope it will stay as that way, would be the Moondrop Chu I got from them. No paint chipping at all so far, though the cables of it being attached are a bit annoying but it’s cheap so I can live with it.

For now though, I am done with Moondrop due to having 3 strikes from them, my Starfield’s paint chipping, my Aria’s paint chipping and cable malfunction and my Kato’s 2pin female connector getting screwed by just removing the cable from it.

I am sorry about all of that, but yeah I was at the same place with Moondrop around the end of last year. They don’t care about their customers. As one of the biggest brands for IEMs, they don’t think it matters, but on even a short timeline, nearly everyone has a bad Moondrop experience.

I cracked my Aria open, attached the cable connectors again, and replaced the wires, since the ones they used weren’t insulated at all. The shorts were gone, and grainy sound cleared right up. I am guessing that most of the sound issues that people complain about with the Aria are due to the wires being crossed, or shorts in the connectors. I almost never use that IEM today, but it works fine now that I fixed it.

So, here’s hoping for a quick recovery, i have my 3 vaccines, and that i can get some enjoyment out of the weekend

well… that was a bit optimistic

Had fever all through last weekend and felt pretty shit up until wedensday. Better now (still not 100% though), but have some coughing and a clogged nose with reduced smell and taste! The worst bit is that this last week has had proper summer weather (not that common on the west coast of Norway), and now when i finally is getting a bit better the forecast is rain the next 9 days, and way cooler temperatures

Just my luck i guess. Hopefully i’m done with covid for a while though…

Sorry to hear that, that was a solid week.

You reminded me, that I am overdue for the 2nd booster, and need to schedule it.

Sorry to hear. I can relate, both my Mesa Laboratory and Aperture Science mugs lost their handles while my wife was loading the dishwasher during the last year.

handles can be secured with adhesive…but my mug, I have to find some cheap foodsafe ceramic paint LoL

I live in New Orleans, which seems to be going downhill fast (ironic, since there are no hills). We are hemorrhaging police officers rapidly because of low pay and few benefits, so crime is becoming even more rampant than it was (it was already pretty rampant). A police sergeant living on my block told me yesterday, “You’re on your own!” Meanwhile, our mayor just made a taxpayer-funded trip to Switzerland so she could sign some ‘sister-city’ proclamation. If the city were Montreux, I might get it (they have a famous Jazz festival), but it’s some Swiss city I’ve never heard of.

Incidentally, this is why I listen to music on IEMs so much… it helps me to detach, disengage, and mellow.

Therefore, this is why to this day the advice that my father gave me is still relevant for me to follow and to serve as a guide till the end of time. He said to me “Never ever trust the government ever on how they will make things easier for you, trust in yourself instead.” Hooo boy I do trust in myself all the time, because I know at the end of the day, since you have described that scenario, it’s also happening here therefore I feel the same sentiment and rage that you have for those types of subhuman wastes who are in a position of power.

“You’re on your own!” Fucking exactly I am on my own, because I cannot give a rat’s fucking ass that you would help me in the first place, but if I do did it on my own, all of the sudden you’re going to tell me that I have to abide by the rules? Fuck you! is what I am saying to them, for it is still unfortunate that double-standard still exists, just like here. If you are a rich asshole there is a due process, but if you are a broke ass person, you’re going to jail without process. I know it’s not related to what you’re ranting about but you do get what I mean, since I am too have been into hifi just to suppress the harshness of so called “reality”.

Get well soon, prioritize on your recovery more and make sure you stay safe and healthy as you can be, for that virus has been a pain in the ass still despite the world somewhat is becoming a bit normal, but that is a stretch when it comes to it being “normal.”

Also speaking about rants, my Fiio BTR3K that just got recently replaced by a new one due to its previous ass not being able to charge for shit, is currently having an issue that it does not enter USB DAC mode, same as connecting to my phone via USB-C to USB-C. Luckily the Bluetooth still works but come on! I need the USB DAC Mode still every time I am on the road for I need it for convenience and I cannot goddamn carry my ifi ZEN DAC all the time!

There are too many people on planet Earth, so there’s not enough room to ride my horse.

Where are you trying to ride your horse, exactly? I used to live in Vermont, there was no shortage of horse riding area.

Go to Wyoming, there’s plenty of open land there. Or any of Central Plains states, really.

sounds like you’re trying to have a horse somewhere a horse is not meant to be. there is LOTS of space out there…

How are you feeling? This last wave of COVID has been rough. I lost two aunts recently to COVID.

I have been busy with a big move, and not online much in the last two weeks.