This is the official thread for the Schiit Loki Max

5x the price, still just 6 bands but comes with a remote…Okay…
When I heard about the Max I was more thinking about 10 bands or more.

That price has me scared about the Tyr.

what is so different about this over the Lokius to justify a 400% price increase?

I think it’s the novelty of the dials turning on their own, lol.

I think it’s the novelty of the dials turning on their own, lol.

Always exciting when the people on this forum who start with budget gear and talk themselves further and further into the wormhole of kilobuck headphones and headphone amps then get offended by gear that is “expensive to them”. I say this as someone who will never own one of these, unless something unforseen occurs. I just remove the offense. Do you know what else is out there in the audio realm??

They already make the lokius for around 300 for those that don’t see the price as justifiable, basically same features sans remote, but the loki max seems more geared at sound quality than the lokuis or loki mini+. You can pretty easily see why the loki max is so expensive by looking inside, but in the end the sound is what will justify the price. So if it sounds the part I don’t see a problem.

The mass majority of cheap hardware eq sound not great imo (and you’d be better off using a nice software eq imo), would be nice to see if the loki max can somewhat break that (and yes sub 1k is considered cheap, a quality mastering stereo eq is expensive), the loki max could be a pretty cool offering depending on how it ends up sounding in the end for a simple option that actually sounds good, but who knows until people start getting them in

Same idea of looking at the yggy when the bifrost 2 has basically all the same features, it’s all in the sound that justifies the extra cost

I’d also assume Loki max is more for 2Ch, i dunno why someone at a desk with a headphone setup would want a big hardware EQ…

I could see someone using this at a desk setup if they went high enough (since most of the higher end amps and dacs are larger than the max anyways lol), although with the remote it is aimed at 2ch for sure

For your EQ discussions

Don’t we already have a few threads like this? This discussion really isn’t over the whole “to eq or not to eq” side of things, rather just discussing the reasoning behind and market positioning of the loki max (so I feel like it would be better served with an official thread on it which I’ll make right now)
Moved to dedicated thread

what is so different about this over the Lokius to justify a 400% price increase?

All of the things in the circle: 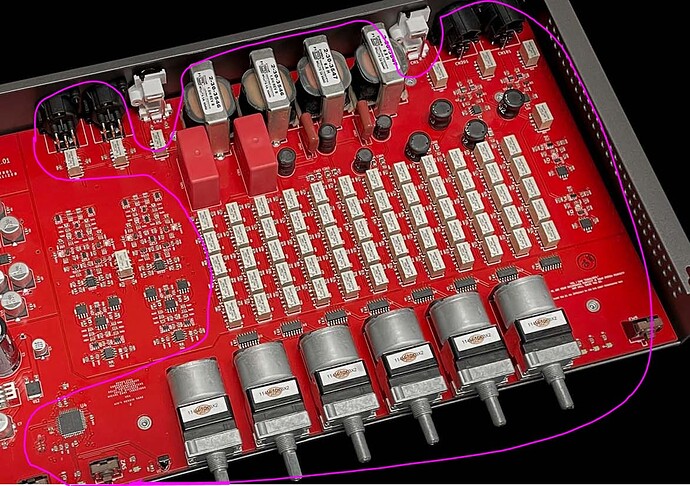 Power to ‘em for putting the $$ in the circuit design. It’s gotta be really hard to describe to people why that pic makes this $1500. Especially since I don’t see many systems with EQs these days, at least around here.

(Though I do feel like I’ve have seen a rise in single driver speakers, so I imagine these lokii are really well timed releases)

Time to resurrect the Bose 901s I guess.

Meh. For high end folks it might be a thing. It looks very nice. And while I like the idea of it as it seems to offer greater function and precision over the Loki (to be determined by the review squad in the very near future I hope), they completely leapfrogged the mid-fi folks, which is kind of a shame. I think I can turn my own damned knobs, thank you very much! Just more schiit to break. Oh well. We’ll see how many get sold. How many of you are lined up credit cards in hand? LOL…

I like my Loki and am semi-curious about the Lokius.
But this is a bridge way too far for me.

I am sure they will have many buyers though.