I’m interested to know what you guys think about the above. I’ve tried the demo on my Hackintosh along with my HD600’s & the difference in sound is stunning. Now I’m quite an old man & my hearing isn’t what it to be so no doubt this should be taken into account. An thoughts, ideas. is it just snake oil doing some weird stuff or is it legit?

I’ve read a lot of forum posts on this topic. The closest thing to a consensus seems to be that the problem is not what True-Fi does (which many like while a few don’t) but what it costs. People feel they can do the same thing for free or on the cheap using EQ, plus EQ has more inherent flexibility.

But the hidden price of EQ is often the learning curve to get up to speed using it. That said, the only available EQ tool I know for Macs is called eqMac2 (https://bitgapp.com/eqmac/) and is pretty simple to use. You simply drag any of the white points on the graph up to increase the loudness of that frequency and down to decrease the loudness. Here I’ve done that to match the Sonarworks HD 600 profile: 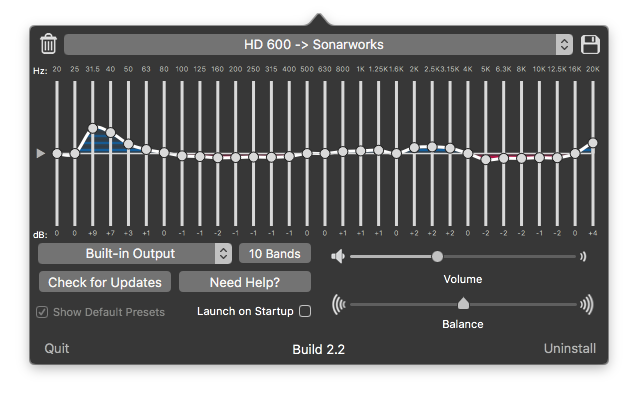 In theory, this should replicate the default True-Fi setting for the 600. To additionally emulate its age-related treble boost, for example, you would just raise the dots to taste starting at 6.3K while listening to a track of music to hear the effect of your changes.

If you or anyone wants to try this feel free to post any questions here. I’’d be curious to hear whether you find the EQ version matches the real thing or not. (I don’t want to risk installing even the TruFi demo on my system for fear of de-stabilizing the audio chain and messing up eqMac2, which I’m totally addicted to.)

Thank you for your reply & sorry for my slow response! I installed the app you suggested but for some reason it won’t run on Mac (Hack) which is on Mojave 10.14 I haven’t pursued the problem yet as I’m going to upgrade my machine in the next week or two. I’ll try again once thats done & let you know how I get on.

Honestly I’m surprised this app isn’t more popular (considering the amount of people obsessed with flat FQR). I just installed the trial and it makes the NDH 20s perfectly flat and neutral. And given their extremely low THD across the spectrum, these would definitely make extremely good mixing/mastering monitors with the 'correction. You can also add a bit of bass or treble to taste. $80 doesn’t seem that bad considering how easy the app is to use… if I really wanted a flat accurate signature, I’d rather pay the price than mess with EQ APO or similar and setup custom profiles… etc…

image.png289×597 30.2 KB
Not sure I’ll actually purchase a license myself, but it’s interesting to mess with and see how different headphones take to EQ. Lol I personally think it’s worth looking into if you are the type to “chase” a flat “accurate” response…

Playing with it… There’ definitely a few tracks where the flatter response sounds better… but honestly in a lot of cases… the the out of box tonality of the headphones are more pleasing to listen to.

I really like sonarworks reference 4, but I wouldn’t listen to music for enjoyment with it

Yea. I def get that. Im not sure I would either. I think it’s interesting to try out though to have a point of reference for what “flat” is though.

Well, that’s sonarworks version of “flat” so it’s not absolute lol. I sent in my clears to get an individual calibration for my pair from sonarworks. Mainly for only studio

Right, you’re referring to manufacturing variance headphone-to-headphone, right? I know they take an average and decide on a compensation curve basically.

Well I’m saying that when you set it to neutral, you are setting it to what sonarworks considers neutral. Their master fr is not universally accepted. It’s just what they think is correct neutral. Here is a summary of what I am trying to say by MaynardGK lol

Sonarworks profiles are made to match their house conception of what a flat sound is.

So I think referencing the Harmon curve is a bit off as an example… since I don’t believe that is intended to be “neutral”… but rather a combination of what is “perceived” neutral and what would be considered “pleasing” to most consumers… hence the “bass” tuning part of the Sonarworks app. But I get the point.

Yeah sorry about the confusion, I don’t really like getting into this stuff either lol (as you can most likely tell)

In college, I had to do some mixing and mastering for some student film projects, something like this would have definitely come in handy then. I just remember what a pain it was to get everything leveled and tuned correctly for our films to sound decent in the theater setup… lol

Can of worms territory. Headphone neutral FR is typically defined as matching how anechoically flat speakers sound when put in a good room. Trouble is no one agrees as to what the correct room effect should be. Anechoically flat speakers are not flat in a “good” room (ignoring near-field?) because there is some degree of bass reverb but the highs tend to beam directly at the listener. The total effect of this is an over-all warm tilt. There is no correct answer to exactly what this tilt should be. And in part it depends on listening loudness.

Harman has a minority opinion that the tilt should be more extreme (bassier) than most others advocate for. But you can’t say Harman is wrong. You certainly can’t refer to a recording studio standard, since there isn’t one. I believe Sonarworks maintain they developed their take on neutral FR independently of Harman in consultation with customers of their recording studio software. They add that the similarity between their work and Harman’s work is simply evidence they’re both on the right track.

In the same vein Sennheiser did their own research years earlier and came up with their own modified version of the diffuse field curve. This suited their purposes because it has much less sub-bass than Harman and sub-bass seems to be the hardest thing to achieve with dynamic transducers in an open-back housing. But it’s perfectly legit. It’s just closer to a typical 2-channel sound than a 2.1-channel sound.

What the Harman team (Sean Olive, et al) say is that a) their FR target matches the tuning of their reference loudspeaker system. And b) their listener research was done to validate that this is also preferred by people listening to headphones as well as to loudspeakers. But where did the tuning of their reference loudspeaker system come from? Again, it has a greater warm tilt than is common. So far as I know it’s the result of Floyd Toole’s work at Harman that preceded the headphone research.

What the Harman team (Sean Olive, et al) say is that a) their FR target matches the tuning of their reference loudspeaker system. And b) their listener research was done to validate that this is also preferred by people listening to headphones as well as to loudspeakers.

Could be wrong, but ‘b’ is where I think it’s off.
According to an innerfidelity article, it’s as follows. 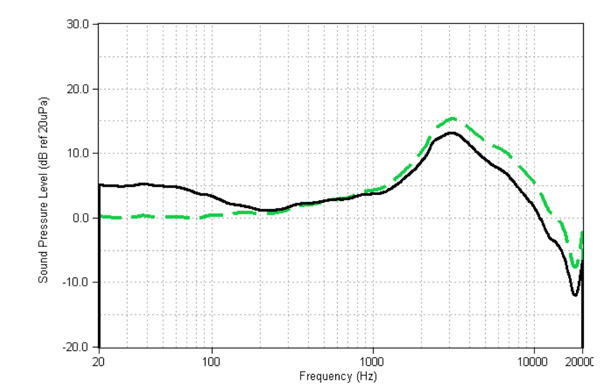 Green curve, being the measurements from their loudspeaker setup in acoustically treated room measured flat… averaged from multiple eardrums.

Starting with the green headphone EQ curve, listeners were given headphones with ability to adjust bass and treble. In separate experiments, listeners arrived at the black (2013) and blue (2015) curves above, with somewhat more bass and slightly less treble, perceived as accurate or preferred.

Harmon arrived at the “Harman Curve” with the accentuated bass after letting multiple users adjust the parameters, starting from neutral/flat, to their personal preferences. Again, the Harman curve itself is not intended to represent “netural/flat” itself…

Maybe I’m wrong in all that, but that was my understanding.

1st its harman, and 2nd please stop not the measurements I just want to enjoy life lol

You were the one that started bringing up semantics about only being “Sonarworks interpretation”!.. lol

You’ve only yourself to blame for this, sir!

but yeah, that’s fine… Im out too… no more curves.

I guess that’s true lol, I do try to keep my responses vague and un detailed because I don’t like to talk about it (even if I know a fair bit about it, sorry I seem intentionally dumb or negligent at times maynard lol)

M0N is excused from having to follow this digression from the TrueFi thread, lol. (Same for anyone else who works with technical data for a living and wants to get as far from it as possible during off-hours.)

Green curve, being the measurements from their loudspeaker setup in acoustically treated room measured flat… averaged from multiple eardrums

Fascinating. When I first read this stuff a few years ago, I just assumed everything was correct. But it can’t be. Surely, the green dotted line is mis-labeled both in the place you cited and in the original location of that image, in Tyll’s own headphone FR tutorial (https://www.innerfidelity.com/content/headphone-measurements-explained-frequency-response-part-one). The green curve is essentially identical to the live-sound diffuse field measurements curve by Hammershøi & Møller published in 2008. This has nothing to do with loudspeakers in a room. Essentially, it shows the amplification effect of the shape of the human outer ear plus ear canal on sound arriving at the ear drum in an open-air environment: 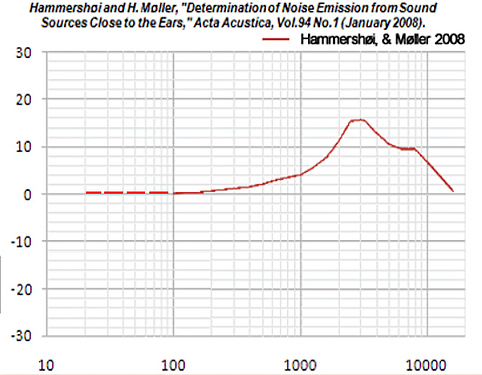 You can find graphs of measurements of the actual Harman loudspeaker set-up here: https://www.innerfidelity.com/content/warren-tenbrooks-summary-head-measurements-harman, for example:

where the red and green curves are the Harman reference loudspeaker system. These curves have the dramatic bass boost that is blatantly lacking in the dotted green curve you reference. Plus, when you merge either the red or the (solid) green curve from this second graph with the DF curve, you essentially get the solid black line curve from your graph. And that is the 2013 Harman target.

Harmon arrived at the “Harman Curve” with the accentuated bass after letting multiple users adjust the parameters, starting from neutral/flat, to their personal preferences. Again, the Harman curve itself is not intended to represent “netural/flat” itself…

Having arrived at something similar to the black line curve (2013 Harman curve) in your graph, Olive and company, presented music samples to random listeners via headphones EQ’'d to a variety of FR response tunings including that black line curve. A statistically valid majority of listeners preferred that EQ over the others. They then did further listening tests using the set-up you describe to allow listeners to modify their preliminary Harman target to taste. The latest Harman target is the result of this input and is noticeably warmer in the upper mids than the 2013 version.

Im out too… no more curves

But … but … the record has to be set straight! Posterity demands we figure this stuff out and let the world know right here in this all-important HiFi Guides thread, lol.

But … but … the record has to be set straight! Posterity demands we figure this stuff out and let the world know right here in this all-important HiFi Guides thread, lol.

Ill read through all of this including the article you sent when I have a bit more time. =) Definitely some new info for me there too… so it does look interesting, thanks!

And @M0N you are free to refrain… lol