This is the official thread for the ThieAudio Legacy 2 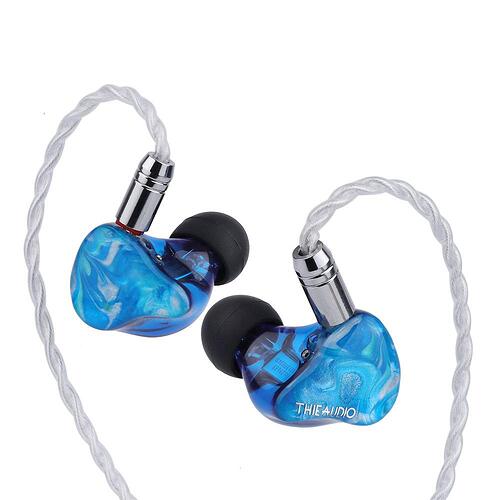 The Legacy 2 is now my budget recommendation. This is one hell of an IEM for only 99 bucks. This is IMO the best packaging Thieaudio has done yet and I love the new smaller case. The cable is perfect for a budget cable and these are arguably the most beautiful IEMs Thieaudio has ever made. The nozzle has been redesigned and I love it now (Legacy 3 tips could slide off easily). Tips slide right on and are held perfectly in place.

L2 - Some BA timbre shows its ugly face, but generally extremely well tuned overall, detailed, dynamic and fast. I do prefer EST implementation of treble vs this BA (it’s a tad bright & crispy for me) but for the budget segment, this is awesome. The mids and bass are very good. Thieaudio know how to do beryllium.

The L2 is the first IEM I’ve listened to on the D90SE + A90, so I am trying to curb my enthusiasm because I know some of what I’m hearing is the change in DAC. Need more time with this DAC and the rest of my collection.

No question, the Thieaudio Legacy 2 is a winner. 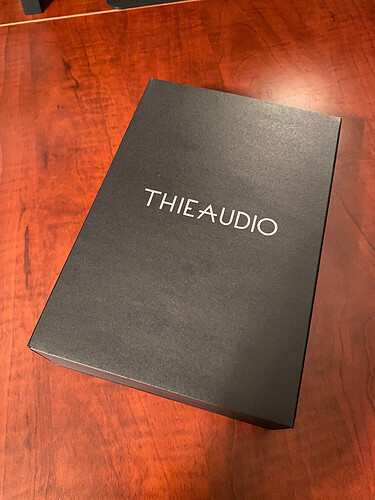 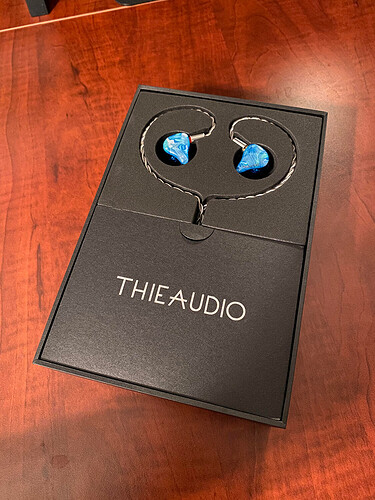 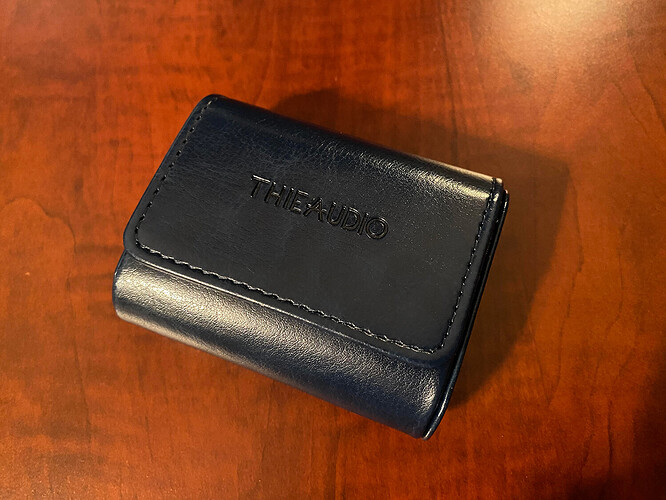 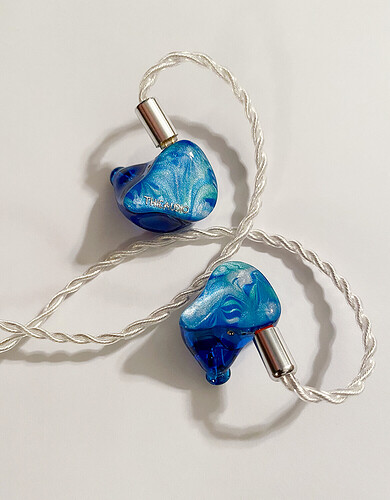 Shell comparison of the Legacy 2 vs Monarch… 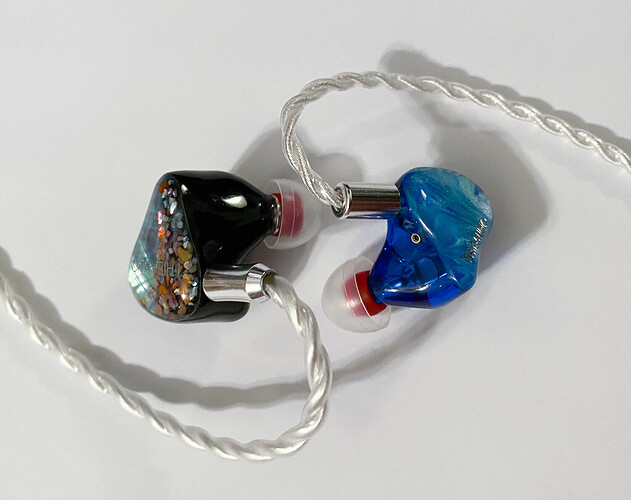 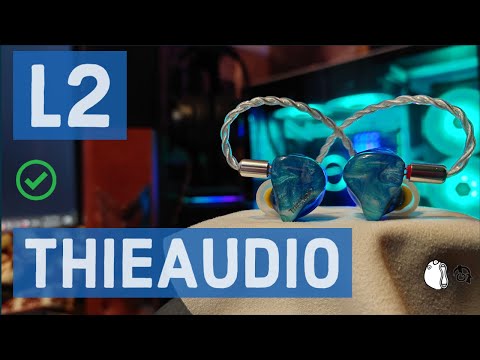 Just ordered! Love to have hype for something that doesn’t hurt the wallet, and may ACTUALLY be something fun to look forward to having in the ears 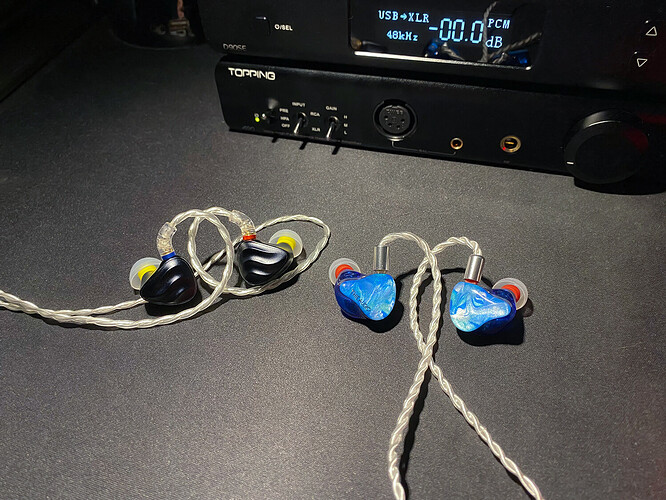 The Legacy 2 sounds more extended than the FH3 and is generally brighter. Both sound quite similar in bass & mid tuning.

The FH3 sounds a bit more full vs the Legacy 2 which feels more nimble yet more thin.

The FH3 is considerably easier to drive than the Legacy 2.

Both IEMs are very good with speed technicality.

The deciding factors are if you prefer a brighter signature or not, metal vs plastic shell.

Both IEMs are great but I have to give the edge to the Legacy 2.

@Resolution When you do your sound impression of the L2, could you compare with the L3?

I think one of the big questions is: What do you get for $20 more on the L3? Aside from options and customs.

To me, the L3 was “good” but not surprisingly great. Biggest issue was the upper-mids and highs seemed… somewhat smoothed over, kinda veiled. Maybe it was the timbre? Like if the FH3 was a cleaned window, the L3 was a bit fogged over. Not like that smoothing is a bad thing, but just isn’t what I prefer.

Legacy 3 is generally softer, smoother and less resolving. The bass is not nearly as defined as in the Legacy 2. I immediately felt inner-ear suction issues with the Legacy 3 which did not exist with either the Legacy 2 or FH3. I wanted them out of my ears pronto.

On Amazon UK so just ordered - seems a no brainer so I can get a taster of a Be DD.

Just received the L2 so these are still my first impressions.
I have and enjoy quite a bit FH3 (and TMZ Live 3) and the graph Resolution put up there says it all.
I tend to prefer warm sound mostly because i am really sensitive to harsh high peaks, but I can recognize and enjoy fine details when I hear them, still I need my bass to be there.
These L2 are very very well balanced, sub and mid bass are there, fast clear and sustained but they never bleed into the midrange. High are well detailed but could get close to harsh on some recordings. Again I am sensitive to this part of the spectrum and they never made me uncomfortable.
The midrange are simply fantastic, very revealing. A multilayer sonic experience. In this regard, L2 are superior (even if not by a lot) to FH3 for me. But it really depends what I am listening. FH3 soundstage and overall bass mid high blend is very pleasing to me.
L2 is great set and considering the price point a keeper, but I will not sell my FH3 those will stay too.
I think I am happy for a while with these 2 and if I travel and have to fight some loud background noise the TFZ/Live 3 will come to the rescue.
Play more & listen more.

I’ll add my initial thoughts too.
I can see this set being a bit “marmite” for many.
That BA dominates proceedings and is very forward and “in your face”.
It’s super clean and detailed but I can see it being wearing for some.
The bass is tight and fast but it’s a bit like the shy kid at the party; it’s there but doesn’t really join in the fun.
I have another 1DD/1BA set (ikko OH10) and both suffer the same problem in that I get the impression that the 2 drivers are being asked to cover too big a range and neither set is that coherent as a result.
I need to run these in and see if the bass comes out to play and do a comparison with the L3.
They’re not a bad set by a long shot, given the price, but they’re not what I expected and for me, the L4 is still the peach in the Thieadio line up for those on a budget.

Update.
Never been a believer of burn in but I’ve left these playing at high(ish) volume for around 6hrs and the shy kid in the corner has had a few beers and has fully joined the party.
Still mid forward but nowhere near as harsh as my initial listen…think I’ll reserve further judgement until I’ve listened for a more extended period.

I appreciate the impression and honest caveat. Interested in the longer conclusion. Thanks!

Update: Bought one for supper cheap on eBay, couldn’t resist and offer was accepted. 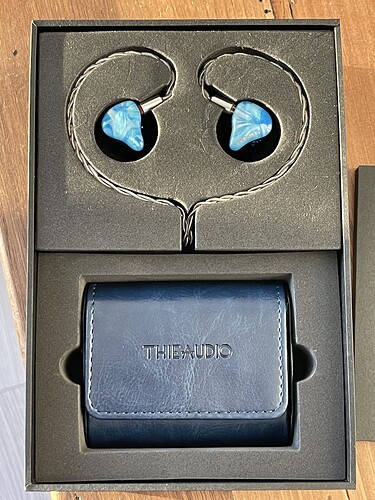 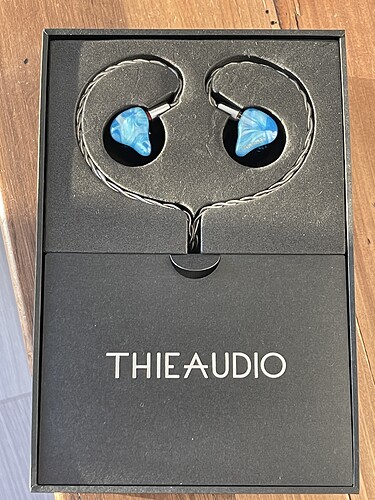 Just got mine! First impressions right off the cuff, no more than 5 minutes of track skimming and skipping…

I can immediately hear a great tuning. Really stellar tuning by the people who made these. The upper bass/low mids slam very well. The mids, meanwhile, are prominent and not recessed from any of the bass. And the treble seems apparent enough to give the set a lightness or air.

I don’t immediately get a mid or down to sub bass, but the hits I hear a bit higher in the low mids/upper bass still slams well enough to give these a nice thumpy taste without getting downsides elsewhere. No sibilance either in the treble.

This is only after five minutes mind you, but I love sharing that out of the box reaction with little time to process a lot

The downside to me so far, and likely due to the low price point, is the lack of stellar resolution to match the stellar tuning. The vocals and various instruments, on some of my test tracks, sound a tad raspy. As if….the details are trying to come out but they don’t have the smoothest depth to them. The effect is small, but after spending so much time with things up in the $500+ IEM area, the lower resolution is noticeable enough.

Even just after 5 minutes, I would probably recommend these at their price pretty well. On the impressions developed so far, I would rate my enjoyment at about B+. A strong recommendation considering what else may be hovering around that rank for me. See rankings list.

At $100, these have the pleasing tonality I only get of an A ranked IEM, in terms of how I enjoy my audio. Maybe even A+ on just tonality actually. However, the low cost driver arrangement does make the resolution lower in enjoyment than the frequency tuning. I would have to put those other qualities of the technicals at around B-, perhaps C+. They do alright, but not like tribrids - which is what I’m coming from.

I would recommend these, at least on 5 minutes alone, above any other set under $200 that I’ve personally had the chance of trying thus far.

I have many more IEM’s coming though, so I’ll make a video on my channel about all of them. I’ll probably not do a dedicated Legacy 2 vid just yet though, until I can see if it wins out over at least 5 or more that I have coming at around this price. The L2, to have such a good impression after only 5 minutes, is a very good sign though!

I’ll try to remember to share the battle royales when it happens!

P.S. I just realized to mention the comfort and looks. These thing actually fit more nicely in the ear than the ThieAudio Clairvoyanace, the Xenns UP, and the Unique Melody Mest MKI and MKII (from what I recall trying the MKII briefly, and for my ear shape). It makes sense given those more expensive sets have more stuff inside, so they’ll be bulkier and more challenging to make well fitting molds!

The looks are also great. I really dig the light blue color choice and making the shell so appealingly translucent, despite being apparently cheaper to produce. No metal nozzle, for example, just an extension of the resin chassis. Still, I have all love for the design regardless. Great work ThieAudio!

Agreed. Everything of course in context of this being a $100.00 set, nice job Thieaudio!

TheAria to me is shrill thin and lacks detail. That the way this hobby goes.

Damn! That person really can’t enjoy the IEM’s tonality because of the technicals!

I notice the technicalities being poor in some respects with resolution, but honestly for $100…loving the tuning enough to recommend regardless.

Different ears and tastes I suppose!

I think the L2 is excellet in it’s price range.
I use music to create my opinions so…

I must be missing a joke
You are not mocking dude…right?

Oh lol, I thought he was just having fun watching the convo. But I’m off on these things sometimes