Which IMR acoustics should it be?

Hi I have a question and hope for your help and expertise, I would like to buy a pair of IEMs from IMR acoustics, but I’m a little overwhelmed which ones they should be, it should definitely be in the lower to middle price segment. I like listening to different genres of music and house music, so the low, middle and high frequencies should not overwhelm him and of course the bass must be crisp and to the point without becoming vibrating or spongy. Since imr acoustics offers some, I don’t know which ones would suit me, I would also buy them used ,or iam on a wrong way with the IMR and that’s not the right IEM for me.
I hope someone can help me, thanks. 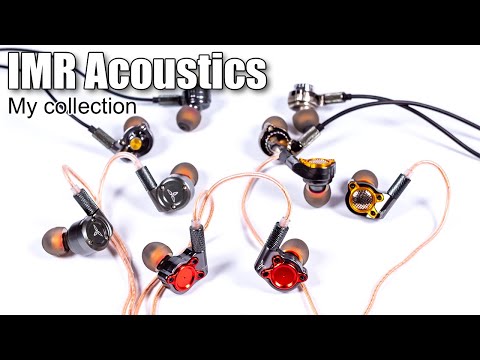 I had never heard of the brand before. I have watched a couple videos from this guy before, and he seems to like them. They are hard to even find reviews for, the R1 Zenith seems to be the popular model, or was a couple years ago.

Their hybrids are DD and Piezo, which is a driver combo that isn’t very popular today on IEMs. Most are DD and Balanced Armature ( BA ) now, so that is interesting.

The IEM market has changed a ton since the Zenith came out. I am betting that there are far better IEMs today.

Crinacle has a graph on them

None of those look good, the blue being the best of the them, but that is a lot of energy at 4k, otherwise, I would be onboard.

I had never heard of the brand before.

ok, but which IEM is something for me, which one would you recommend?

The Ozar and the splash of gold are terrific DD IEMs if you want to stretch to £300 the Dark Matter are amazing. IMR have a eBay page for used called pre-loved audio worth checking out some great offers statrting from £99

The problem is that there are many iem, but you don’t know which one suits you and you like it, unfortunately I can’t listen to it and since I’m in Germany, it makes it a bit more complicated, I have one on the German eBay classifieds page Discovered the offer, namely the Opus mia for 250 euros, is it good? otherwise the splash of gold would also be nice, the dark matter is supposed to be good, but unfortunately it exceeds my budget, even used on ebay it would cost almost 400 euros, but what don’t you do for your ears

it’s not just the money, if i knew i liked it, i would buy it, i’ve had my 1more triple driver for over 6 years, i keep what i like and treat it properly and only buy when the old one doesn’t work anymore or technically no longer up to date.

Opus Mia is a fabulous set with great tuning capabilities and a steal at that price all IMR have fantastic build quality huge bass and superb MIDs and treble which to can alter dramatically with the included bass and treble filters.

Thank you, but I still have one question, my ears are medium-sized, maybe a little smaller, the Opus mia should be big, at least they look like that in the pictures, you can wear them outside for a walk without them falling out or causing pain Then they would be something for me, the price is okay too, I just don’t know if they are state of the art?

Her is the link

Thanks, I took a bit of time to hunt down what you were talking about. It seems there is some history with the guy from IMR ( that predates my time here ).

Is there still bad blood amongst the audio community when it comes to this company because of Bobs past history at Trinity? if so would it sway your decision whether of not you’d purchase any of their sets?.. [IMR Acoustics Opus Mia earphones review]

The last line in that thread was a great quote from @voja “Worst way to throw your money. You would be much better donating that money to a charity and buying a 100 USD IEM’s

You know, I’ve come to question everything I said back then. It was quite harsh, and I think immature. I made very bold statements and accusations, but there are some things that still stand to this day: build quality does not match the price. Whether the sound performance does, I cannot say.

I did some research, and it appears as though Bob was only the designer at Trinity, but then again… who knows. I am planning on sending an email this week to Bob and asking him if he is open to hop on a call with me and do an interview where he clears up this controversy.

It’s shady, I can say that. It’s very foggy. And if he was involved in any way in carrying out the crap over at Trinity, then I doubt he will tell the truth in an interview. Those sort of people are sick in the head and know how to present lies as the truth — it’s second nature to them.

If I were to give him the benefit of the doubt, I would try to see myself in that situation. What if I got employed by a company and they were doing some shady sh*t that I had no clue about. Even if I were to depart from that company, that controversy would follow me.
And as I found out, when you speak the truth, people on the internet take that as a weapon and use it against you. It’s a loss-loss situation.

I can say the following about IMR:

I respect the LZ A7 approach of having multiple tiers of tuning variance to combine in all manner of ways. I think the build quality is remarkable solid. The EDP was so long ago I cannot comment on sound, but I know I really liked it / was very impressed at the time. As far as the Elysium, I found bass very sufficient in quantity but hazy compared to something like the Serial. Minor fit issues too. I would never have paid the $1000 it originally cost, if I had I wouldn’t have been content when comparing it to $300-500 sets that I think sound better.

For an example, with no configuration was the bass better than the Serial, despite having an ADLC driver and bone conductor both contributing to bass vs a biodynamic handling low frequencies in the Serial.

The EDP was good so I expect the EDP+ to be even better. But my overall impression is that a better and more cohesive sound can be had for less. With so many models using so many mixes of usually at least 3 driver techs, the odds that each product line has a cohesive sound are slim (areas of the sound dealt with by the different drivers sounding distinct rather than part of one big sound).

All I can say is Bob is lovely to deal with and takes pride in his product, but that the company he worked for (Trinity audio) is guilty of straight up fraud and theft. It’s hard to decide where to draw the line so I guess it’s up to individuals how willing you are to directly support the company. There’s a decent chance that the new company was funded at least in part from money scammed from loyal supporters of the old company.

Listening to Jack White’s album Fear of the Dawn on the Penon Serial now and everything’s handled so darn well.

I have IMR NEW ATEN. I think if you searching flat FR it’s not feature of IMR products. I like deep of bass and musical presentation with technically sound witch they have. Acoustic instruments sound unbelievable in a good way (all string instruments like acoustic guitar (Keith don’t go - Nils Lofgren) and violin (Piano Guys - Michael meets mozort)) . All micro details sounds as if you were there (steps, sights and other; for example Chris Rea - Auberge). OMG I said when listening Heilung - Svanrand… This arrows… It’s like you really take arrow in your head

Bob is very good customer! My right earpiece is broken. I wrote to Bob. And what do you think? He just took and sent the right earpiece … As soon as he arrived, I decided that I needed to thank the seller and sent him a broken copy, although he did not even ask.

It’s on example from a lot.

It really depends on what’s your budget.

Some great companies I encountered include: iBasso, Venture Electronics, BQEYZ, KBEAR and TRI.

Not everything by these companies is great. Each one is unique in its own way. There are better products and worse products

I would say up to 200-300 euros or a bit more, but it can also be less. At the moment I have the Fiio Fd1, I’m happy with it, but I really like the fact that you can model the sound with the IMR models. I’m actually looking for a very good all-rounder with bass, but who also gets along well with classical music and conveys the bass well in house music, I don’t even know whether my wishes can be fulfilled in the price range, but one can hope, with so many iem there should be something on the market.

I agree, it gives you options to fine-tune the sound. LZ also has a similar system, but instead of two changeable parts, it’s just the whole nozzle. The LZ A7 is ~$270.

FD1 is nice, I use it as a casual daily driver (after my Jade Audio EA3 literally fell apart).

BQEYZ Autumn surprised me with it’s sound performance, and you can probably get a heavy discount if you ask nicely over Messenger.

I’m not too into IEMs, so you are better off asking people from around here or elsewhere who have lots of experience in this field.

I have heard quite a few people say good things about BQEYZ Autumn. I would need the bass filter to make it work for me, but I listen to a lot of classic rock and prog rock.

Another option to the nozzle solution is the tuning switches. The Yanyin Canon is a very popular hybrid ( DD+BA ) that has dip switches to change the sound profile, for about $350.

I also tend to think that you can find some good picks to get where you want for less. The Tripowin Olina has a better looking graph than the best of the graphs of that IMR from Crin, and only costs $100. It has similar treble shape, but less over emphasized.

I don’t know enough about house music to know what is good or bad for it. There are others that might be of more help on that front. Do you have a price range?

My price range is 200 euro but is wearth I go up to 300 euro,I know is not much money for good IEM,but is a lot of money for me.