The Goldplanar GL2000 is a super polarized headphone. It’s the best tuning ever or the worst depending on who you ask and I personally like it both ways, but stock they just don’t work for everything.

Before and after for reference: 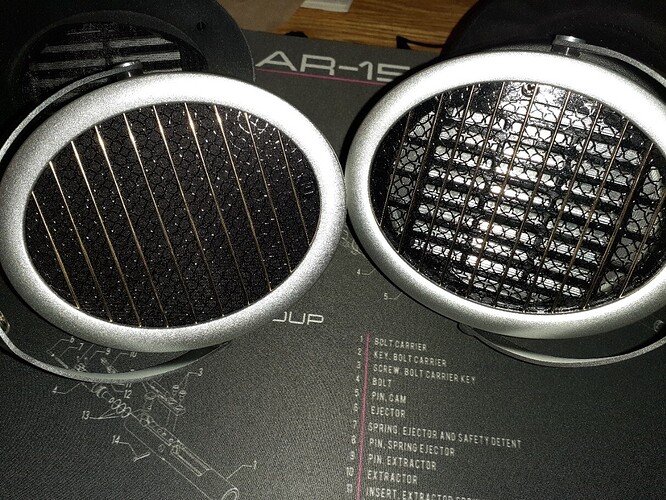 Before you start the mod, make sure you have a nice clean surface to do it on with no dust or metal around.

Start by removing the pads and pad mount ring AND KEEP THE SCREWS A FEW FEET AWAY FROM THE DRIVER AT ALL TIMES, THEY CAN GET SUCKED INTO THE DRIVER AND DAMAGE YOUR HEADPHONES: 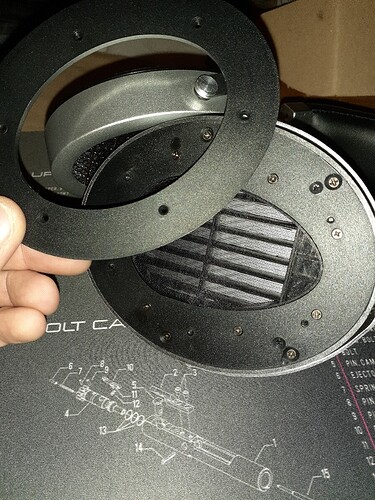 Next, remove the driver from the housing removing ONLY the 5 screws circled below: 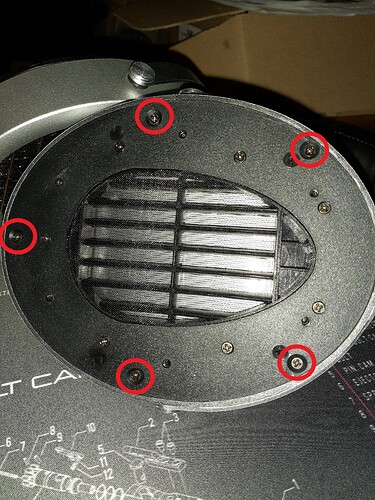 If you can’t get the driver to just fall out press lightly on the top of the grill mesh with a screwdriver and it should pop out: 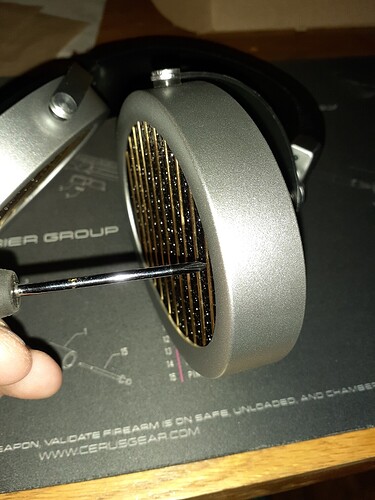 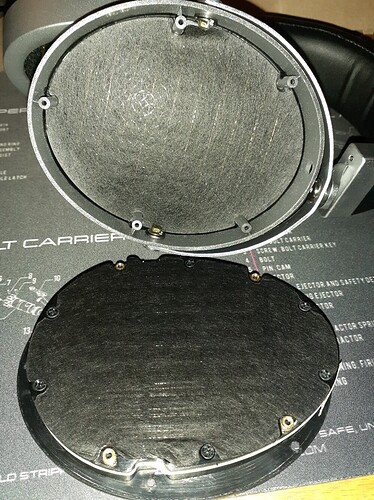 Next step is partially optional as it doesn’t effect the sound much but it does effect the stage slightly. The grill has two pieces of mesh protecting dust from entering the driver housing. The left one is the one you would want to keep in for the least amount of effect to the sound but again this is optional.

Now on to the source of the “compression” sound, the tuning paper glued to the driver. If you’re careful you can reinstall this afterwards if you decide you don’t like the sound (fair warning it does get kinda bright): 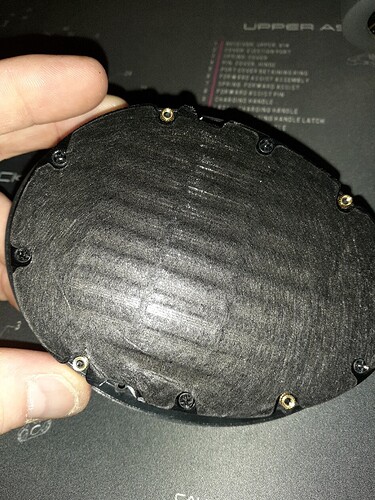 Remove that and you end up with a driver that can breathe how it was intended to: 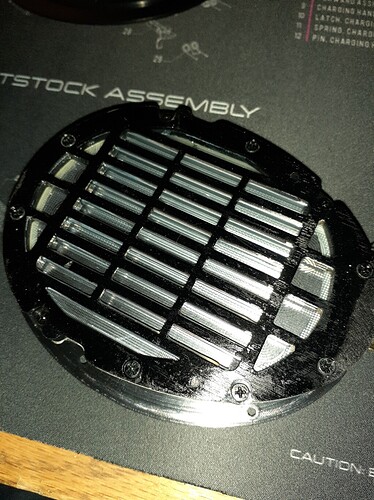 Put it all back together in reverse and you have yourself a modded pair of GL2000s with massively improved imaging, detail, soundstage, and far better tuning for the majority of uses, including gaming, which they are totally top tier in post mod (but don’t get me wrong, it’s good the way it comes for plenty of music tastes)

If you have problems with the sibilance they get with the mod you can cut out some felt and put it in the ear pads and it will smooth out the highs substantially.

Bonus: either a QC issue or they decided to put the felt cushion around the driver opening around the same time they changed to the D shaped hybrids. Original (left) and newer (right) and I’m not quite sure what its for, maybe to stop some slight rattle with the pad adapters or something. 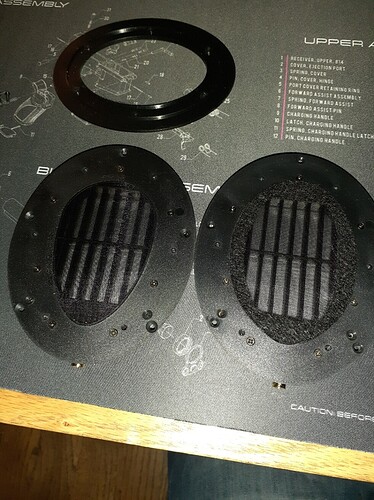 3mm felt tape. 1/2" width. i kinda wish i would have used one continuous piece and molded it around the screw pillars. i think it could fully seal if i did that but getting it just right could take a long time. [fuzzy2] and for anyone wondering the best way to put felt in to tame the highs. just cut to just under the inside of the pad adapter screws and tighten the felt up behind the pad adapter and it’ll never move and looks cleaner than stock imo. [fuzzy1] just played around with a tone g…

Worked just fine for treble. That is 1.6mm felt behind the pad adapter.

ok im done - it sounds so much better . its open , wider stage , bass is better . thank God im not sensitive to the treble .i might put the felt to cover the driver to see how it works .
i sealed the gaps with blu tack as best as i can .

If you took any pictures feel free to post them here

i did a hurry up job and the results are greta imo , ill try to do kore detailed work and take pictures next time .

Yea would appreciate having images. Thinking of doing the felt around driver mod as well

my only real complaint after the removal of the paper on the driver was that the gl2k still didn’t have much bass presence but after you do the felt mod on the inside of the cups it really really improves the bass. in no way too much, just puts it where it should be. seems to tame a bit of the ring they had as well without sacrificing anything at all from what i can tell. did quite a bit of a/b testing between the two pairs i had on hand and the difference was pretty big. its crazy what that lift in bass feel and presence gives you for making them sound more natural and i want to say it gives a really enveloping sound and feel. not only in the audible bass region but in the super low sub bass as well and i’m guessing it’s from helping the bass translate through the pads better from eliminating a bit of flex that would absorb the bass and it’s great.

are you using the stock pads or the hybrid pads it came with?

the leathers seem to be the best all around tuning wise but there is a certain sense of size you get from the hybrids that the leathers don’t quite have, but you take a pretty big hit to bass with the hybrids. for competitive gaming i lean towards the hybrids, for single player games and music i prefer the leathers.

also i ordered some big ass super deep leather pads from aliexpress months ago for like $10 and they still haven’t showed up lol. i really want to see if the extra depth of the pads can stretch that stage back to where the hybrids are and retain the bass presence and have the best of both worlds.

I’m not able to find felt tape anywhere locally. Think I can just use blue tack to hold the felt in place?

That’s why I’m hoping to see some pictures before I start my mod.

im using the aliexpress 120mm pads , its huge but its alright and i like it better than the stock pads the gl2000 came with . u can even do 115mm and i belive it will fit better.

I’m interested in this mod. After burning in my GL2000, I have been more impressed with them than I any other emotion. I often take them off my head and catch myself commenting, “That sounded amazing.” However, every so often, this headphones draws my attention to it doing unwanted things to vocals or drums; this is why I’ve become interested in this mod. I’m a drummer and am particularly critical of drum timbre.

I think I’m treble sensitive but not sure to what degree. So, how does the modded GL2000 compare to 990 600 Ohm in terms of treble/tendency for sibilance? I haven’t yet balanced my 990s but I find that the treble is mostly tolerable for me, even at high volumes, although I do notice cymbals often sound brighter than they should.

if you’re treble sensitive i would say definitely use the felt behind the pad ring to tame it. it gets pretty bright and without the felt it’s brighter than the 990s so if you find the 990s too bright definitely use felt to bring it down a bit.

Oh it comes in that hot? Ah, I may for go it then. I learned when I got a virgin T50rp mkIII that I haven’t the patience for modding past a “1 + 1 = 2” type affair. If there’s potentially a greater drawback to the mod than than stock, then I’ll resist.

I am 95 % satisfied with them stock. I found they needed a 30+ hours burn in but then, with the leather pads, yeh, it’s a great experience. Even movies and gaming, they’re just a great headphone. I don’t think they’ll replace my 990s for movies but for gaming, my 560S may now be surplus to requirement.

I never noticed this until now somehow, but I could send you a modded pair if you want. I really like them as a really sharp tuning style. It’s pretty crazy what you can get out of them with some slight modding.

Thank you for your generous offer, Pokrog. Alas, I moved my GL2k on. I do miss them and would be curious to hear the mod but it appears you’re in the States, and I am not.

I’m also curious about your choice of DDC. Obviously you’ve mentioned the U2 Pro in a couple of posts. I invested in one with temp clocks, and the difference was noticeable. I’m looking to get a second one for my other rig. I don’t do much critical listening on my second rig so I was considering calming the EM noise from my PC down using a U2 Pro with standard clocks. However, I’ve just seen that you’ve got the femto clock model. Have you heard the other two models? Do you regard the price difference as justified?