With a really interesting DAC/AMP comparison included, FLAC files included too, and a contest to win it all.

Now the results are in, and I got it all wrong. The funny thing is, I thought the iPhone was the bluetooth module, because I found it “compressed” and “you could not hear half the cymbals”. Less funny is, I thought the SP200 was the worst? Oh well…

Received The New Geshelli Archel 2 AMP for review
What headphones can i get as an intro to audiophile world?
M0N December 20, 2019, 8:46pm #2

Just going to leave this here, again as I have before lol

Yikers, looks like oluv’s lost his mind. https://www.youtube.com/channel/UC7DQTjYICjBd5ZtLQU3Z1dQ/community?lb=UgxBl5ITmlf0o4hl8ZN4AaABCQ Claiming it sounds worse than onboard on his iphone. I personally love this amp.

Well… if Olav prefer an iPhone over the SMSL SP200, then he is NOT worth spending time on. Then he must be deaf.

I just don’t think his stuff is reliable imo, and that’s why I think you got it all wrong @LeDechaine lol, because it wasn’t accurate in the first place. Also I wonder if he did switch results around to screw around with people like I thought beforehand

I’m wondering about the cables he used to plug to his SU-8, or if his SU-8 was defective. A lot of people in the comments – including myself in the blind test – thought the SP200 was the worst (muddiness everywhere). I thought the DX7 pro was the SP200 because I could hear “clarity everywhere”.

Its like the old saying “either he is dumb or incompetent”.
With that I mean, either his hearing is off or he is not bright enough to see something must be wrong, if he ends up with the iPhone sounding better than the SMSL SP200.

Either way, he is not to be trusted.

He just seems against amps and dacs as a whole lol

Did you try the blind test with your million dollars of equipment, @M0N ?

There’s no point, the test was flawed from the beginning lol, I can just go out and do the test myself anyway lol, and I will pass it with the right gear (if I’m familiar with it anyway)

he’s not really experienced in describing sound in words and covering all important areas, he’s been mostly good at setting up comparative sound demos of 2+ devices. Sure a few times he’s clowned around “proving” that aptX is not worth the hype just because it’s not significantly better than AAC, or that external headphone amps are “not worth it” because he couldn’t tell the difference between some random cheap amp and his iPhone 6, but other than that he knows his stuff, i.e. what sounds good and what doesn’t.

To clarify: he knows his stuff when it comes to frequency response, and can tell the difference between good and bad dynamics. But that’s about it. Detail/resolution, imaging, transient speed, impact, most of the finer points of listening to higher-end headphones still elude him, so it’s not surprising he also can’t hear the benefits of better source devices.

I would say native AAC sounds better to me than regular aptx, so I can kinda understand where he is coming from there (even then though I wouldn’t disregard aptx), but the amp and dac don’t matter thing is just ludicrous to me

IMHO there was something wrong with the SP200/SU-8 combo.

My guess was:
(Huh, spoiler alert, here are the results) 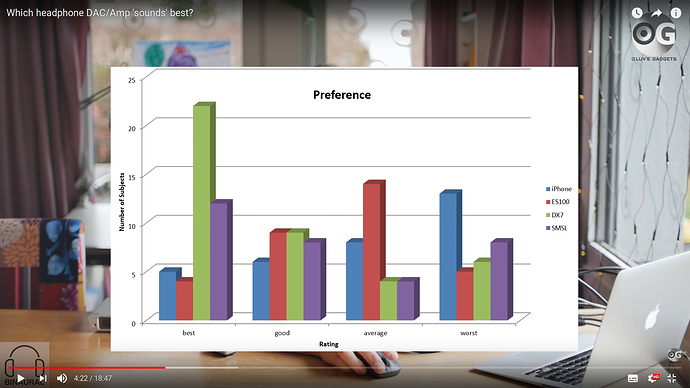 Since I haven’t watched that video, what were the final thoughts then from oluv? If the iPhone came out last what did he have to say about the other amps?

Not much. He said 40% got it wrong, and it was a waste of money for “all us old dudes”. He did not say the SP200 was crap or whatever. But there’s a left/right volume panning problem with 2 of the SP200 he received.

Some points that caught my attention that he mentions are, amps should never make any kind of difference in sound except for power and therefore more volume, But then he also mentions that he admits hearing less bass when using the iphone. seems to me like he just has a grudge.

It’s true in theory that amps should only increase volume without affecting sound, but in practice a good amp will make a difference will positively increase the sound. It’s just the I guess unfortunate to him truth lol

Which doesnt surprise me because who knows the kind of quality control a chinese company like smsl has, if any. Theres a reason why that amp is so much cheaper than the other amps with the same exact tech, for example.

Exactly. Theory and reality can be very different things just like in engineering school when there was always 2 examples for everything, the in theory one and the real one.

It’s the same way for measurement hounds, the best measurements does not mean the best sound in the end lol