Here is my “database” on IEMS and earbuds: RikudouGoku's Database - Google Sheets

I have also created a patreon for me to see how many people actually uses my database or/and reads my reviews. I be grateful if you would simply “subscribe” to me and even more so if you would donate to me. As I hate affiliate links and the likes, this was the best option for me to get some extra funding without getting any extra bias.

Become a patron of RikudouGoku today: Get access to exclusive content and experiences on the world’s largest membership platform for artists and creators.

Just a thought…Did you ask @ZeosPantera and @DMS if it was ok to post personal patreon requests?..seems a bit of a liberty imho no?

I didnt know I had to do that. I apologize if this was forbidden.

I personally think it’s fine since it’s disclosed what it’s purpose for and isn’t shady, it’s respectfully introduced, and it isn’t being pushed on people. I don’t really see an issue

Later on if it becomes a large issue where people are constantly spamming their patreon or asking for some form of compensation then it might get out of hand, but I mean I don’t see an issue with this

Thanks, I have sent a pm to zeos but I guess I got permission already?

I mean I won’t take it down or mess with it, but I’m not the owner of the forum so idk lol

Good SQ but the upper-mids and lower-treble is too much and too peaky.

No Moondrop KXXS/Starfield situation, it is a Blon 03/05 situation but worse since its much more expensive in comparison to the blon fail.

Here are my findings about the difference between the Fiio M11 (returned it due to an issue I got) and the Ibasso DX160 (2020 version).

Moondrop Blessing 2 : sounds warmer and less analytical, making it more enjoyable for me.

Urbanfun ISS014 : polished away some very tiny treble peaks (No Treble “peakiness” from 7 to 8)

LZ A6 (pink filter) : soundstage is deeper.Timbre is a bit more natural (most likely because the treble extension isnt as good as on the M11 and that is where the Piezo drivers are working in)

Shozy Form 1.1 : Soundstage bigger in depth and width. A bit tighter bass (matches well with the DX160) (Soundstage from 5 to 6)

Moondrop KXXS : Less analytical sounding, bigger soundstage in depth and widht, tighter bass, less treble peaks. (rank up from B to B+)

Azla Azel : Tighter bass, bigger soundstage in depth and width (matches well with the DX160) (rank up from C+ to B)

TFZ No.3 : Tighter bass, bigger soundstage in depth and width (matches well with the DX160) (rank up from C to C+)

Final Audio E1000 : Tighter bass, bigger soundstage in depth and widht but reduced clarity in the treble that makes the overall SQ a bit lower (Rank down from C+ to C)

Tin Hifi T3 : Reduced details, which was its biggest selling point and still sounds unnatural (rank down from C to C-)

Overall : the DX160 makes the sound warmer, tighter bass, less treble peaks (although at the cost of treble extension), with a bigger soundstage (especially in depth) and more fun sounding. While removing the analytical nature of the M11 but it loses out some details due to that, especially in the treble.

I think that the reason why I think the timbre sounds better in the LZ A6 and the Shuoer Tape is because the lesser treble extension makes it so that their drivers (magnetostat in the tape and Piezo in the A6) dont “work” as much as before.

rank A-, more details in the “detailed iem ranking” section.

2020-07-26: Added the KBEAR KS2 grade C- and review is up: https://docs.google.com/document/d/1nAmc1Nz7l3OWLwxdpyRYqqNGUNhkhPts8GMmUum1AGI/edit?usp=sharing

It can barely contend with my old iems in that price range (CCA C10) so its not an iem I would recommend.

Added the Kinera Freya grade D+ and review is up: https://docs.google.com/document/d/1MUtRGdwTvLn24MJKOCS6ZQ_rqaD0Te4cnakI7eXA00M/edit?usp=sharing

Summary of what I think in 1 sentence: its like if someone took a machine gun and filled it with needles then shot them all into my ears…

2020-08-01: Added the Intime Sora 2 grade A+ and review is up: https://docs.google.com/document/d/1Sn_1bHqQoJEGnFW91vtspM8hL3ulNTQIhTzvTvtft94/edit?usp=sharing

Really amazing iem. Makes me very curious about their flagship, the Sora Ti3.

This is going to be my nr 1 rec for under 100 usd from now (and among the top rec for above 100 usd too). (if a non-replaceable cable isnt a deal breaker…)

EDIT: Only reason why it isnt S ranked is because the technicalities arent on the same level as the Moondrop Blessing 2 or LZ A6. And that I would like some more bass quantity and mids. I was quite close to give it S rank though.

Awesome! I have another ranking list to check out. Thanks for impressions.

what does an L shape signature mean… does that mean there is a moment where it goes from VERY heavy on one area than very little on another?

L shaped is close to “bass boosted neutral” but still not.

While I would say that bass boosted neutral, is that the mids and treble are neutral while the bass is boosted.

My favorite and actually a very big game changer is the preset for the Tin Hifi P1. Really wish that the P2 has something similar to this sound I am getting with the P1 + EQ.

Moondrop Blessing 2 has some nice EQ potential with the bass and fatiguing treble (sounds similar to what I would expect the Tanchjim Oxygen to sound like actually…). 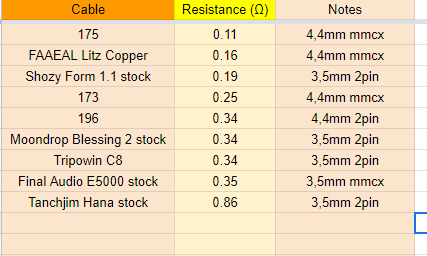 Will probably add measurements of stock cables in future reviews.